This site uses Oakland Cemetery as a lens through which to better understand Atlanta, its history, and its connections to a globalized world. The goal of this collaboration between the Emory Center for Digital Scholarship and the Historic Oakland Foundation is to create a digital scholarship model that can be used to develop future web exhibitions about Oakland Cemetery that uncover and contextualize the interconnected histories of Oakland Cemetery and Atlanta.

Check out the first project in this initiative:

As a microcosm of Atlanta and its history, Oakland Cemetery’s landscape provides the opportunity to study various aspects of the city and its people. Within the cemetery’s African American Burial Ground, which opened in 1866, it is possible to trace the history of slavery, emancipation, segregation, and the development of the Civil Rights Movement. The residents of the African American burial ground represent all walks of life in the city’s history.

Upon the onset of the First World War, Atlanta pastors Dr. Henry H. Proctor of First Congregational Church, Dr. James Bond of Rush Memorial Congregational Church, and Rev. B. R. Holmes of the Holmes Institute urged their congregations to set aside racial grievances and join the fighting. It was their hope that the loyalty of African Americans to the nation’s cause would ease racial tensions and help foster an environment of fair dealing between the races.[1]  The year following the United States’ entry into the war, Pvt. Olin Wimby[2], an Oakland Cemetery resident, died overseas while serving his country. Like thousands of African American men across the nation, Wimby served despite the racism and segregation of military life. Had Wimby survived to return to civilian life in Atlanta, he would most likely have faced the same antagonism that other African Americans soldiers encountered at home following the Armistice. In April 1919, an African American soldier from Fort Gordon, only recently returned from France, was beaten by an employee at an Atlanta soda fountain. From his bed at Grady Hospital, the soldier told police that he was unaware that African Americans were not served at the fountain counter.[3] Despite their initial expectations of gratitude for their show of loyalty and courage, African American soldiers suffered ill treatment and resentment from many white Americans who believed African American men were unsuited for military service, especially in combat roles.

These residents of Oakland’s African American Burial Ground served in various capacities during WWI—labor battalions, infantry troops, and officers. Their service shows the loyalty, determination, and courage required of African Americans to serve their country at a time of great need despite the overwhelming obstacles of racism and discrimination they were forced to endure and overcome.

Below are two different ways to learn more about the African American experience in WWI and those veterans buried at Atlanta's Oakland Cemetery: via a map of the cemetery with the graves of veterans highlights and biographical information on each available or via a series of entries that provide historical context for their individual experience. To learn more about this project and its aims, as well as the team that built it, read our About page.

←The Map   OR   Historical Contexts → 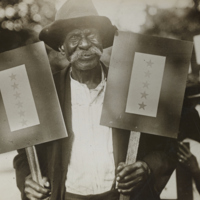