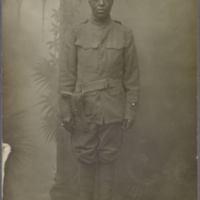 Most Americans know little of the global significance of World War I (1914-1919) and the sacrifices made by millions to ensure the victory of the Allied forces over Germany. Rarer still is a basic understanding of the critical role of African Americans in the war to make the “world safe for democracy.”

World War I was a catalyst in the development of a radically progressive black consciousness, one that would ultimately lead to the mid-century civil rights and black power movements.