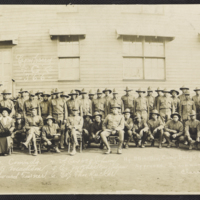 Attached to the 92nd Infantry Division – known as the “Buffalo Division” –, the 366th Infantry Regiment mustered at Camp Dodge in Iowa. During the war, the 366th saw action in some of the bloodiest battles on the Western Front. Lieutenant C.L. Abbot, Captain Joseph L. Lowe, Lieutenant Aaron R. Fisher, and Captain E. White were some of the most decorated American officers in WWI.