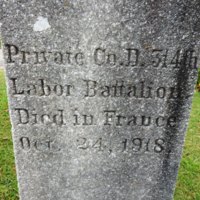 In 1919, the Georgia Memorial Commission held a memorial service for Georgia soldiers who died during World War I. A “special provision” was made to allow the relatives of African American soldiers to sit on the main floor of the auditorium. He is listed among the soldiers of the “fallen heroes of Fulton County” monument at Pershing Point erected by the War Mothers Association in 1920. He is also listed in Soldiers of the Great War.